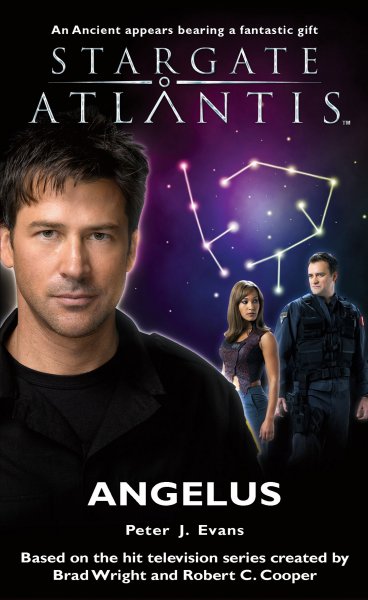 With their core directive restored, the Asurans have begun to attack the Wraith on multiple fronts. Under the command of Colonel Ellis, the Apollo is dispatched to observe the battlefront, but Ellis’s orders not to intervene are quickly breached when an Ancient ship drops out of hyperspace.

Inside is Angelus, fleeing the destruction of a world he has spent millennia protecting from the Wraith. Charming and likable, Angelus quickly connects with each member of the Atlantis team in a unique way and, more than that, offers them a weapon that could put an end to their war with both the Wraith and the Asurans.

But all is not what it seems, and even Angelus is unaware of his true nature — a nature that threatens the very survival of Atlantis itself…

Out in the lightless gulfs of space, two great powers coiled around each other like monstrous serpents. And, like monsters, they fought and tore.

A week before, Ellis had watched the blood of the two serpents spread across Colonel Carter’s starmap in a series of vivid splashes: a brilliant, icy blue for the Wraith, a gory scarlet for the Asurans. Each splash, Carter had told him, was the site of a known engagement. Between these battle markers lay the serpents themselves, twisting wildly through each other in three dimensions — an approximation of the two powers’ battle lines.

The whole map, in fact, was an approximation, and therein lay the danger of it. “Most of this information is days old,” Carter had told him, pointing vaguely at a cluster of splashes. “At best we find out about one of these engagements a few hours after it’s over and done. Really, we’ve got no idea exactly where the fighting is going on.”

Ellis had peered closely at the map, a gnawing feeling of worry under his sternum. Carter had scaled the display to take in dozens of star systems, and already half of them were enveloped by the serpents and their terrible wounds. “Is there anything you can be certain of?”

“Just this.” Carter had touched a control, and a small green dot had blinked into life in the centre of the display.