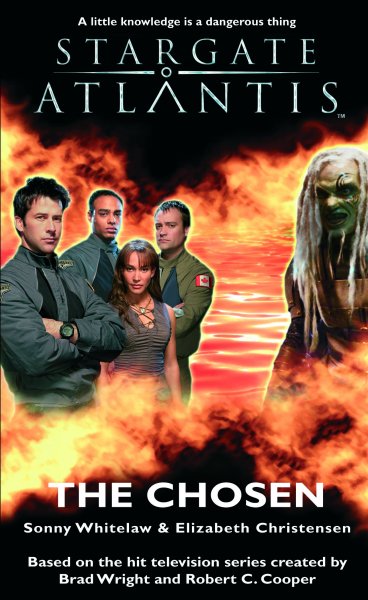 With Ancient technology scattered across the Pegasus galaxy, the Atlantis team is not surprised to find it in use on a world once defended by Dalera, an Ancient who was cast out of her society for falling in love with a human.

But in the millennia since Dalera’s departure much has changed. Her strict rules have been broken, leaving her people open to Wraith attack. Only a few of the Chosen remain to operate Ancient technology vital to their defense and tensions are running high. Revolution simmers close to the surface.

When Major Sheppard and Rodney McKay are revealed as members of the Chosen, Daleran society convulses into chaos. Wanting to help resolve the crisis and yet refusing to prop up an autocratic regime, Sheppard is forced to act when Teyla and Lieutenant Ford are taken hostage by the rebels…

From above them, a cry went up. “It burns. The river burns— and the Wraith with them!”

This time, Teyla made no move to stop the Dalerans climbing the trees to witness for themselves. Indeed, she immediately pulled herself aloft and stared across the eastern fields. The sight was mesmerizing and more than satisfying. The entire eastern portion of South Channel was a blazing inferno. Lines of fiery serpents began to appear through the far fields, where the oil had flowed along irrigation channels. From this distance it was not possible to make out individuals, but she could see many smaller flames moving about, like the wicks of a hundred candles. Having stumbled into the oil, some of the Wraith had been set ablaze. The gruesome creatures had extraordinary regenerative properties, but it was doubtful if those caught in the fields of oil could survive such a sustained conflagration. The three vast columns of Wraith began to fall back.

Cries of joy traveled across the treetops, and Teyla felt a measure of relief. The battle to come would not be easy, but the people of Dalera were now empowered by the sight before them.

Ushat touched her arm. She took his Shield from him, and he signaled the warrior below to blow the trumpet. Reply calls from the Citadel told them that the EM fields close to North Bridge and the western end of the wall had also been disabled. Just before the roiling black smoke obscured her vision, she noticed the nearest column of Wraith headed in their direction.

“They come!” cried a lookout. At the speed the Wraith were moving, the first waves would soon be upon them— far sooner than Teyla had planned.