STARGATE SG1: Do No Harm 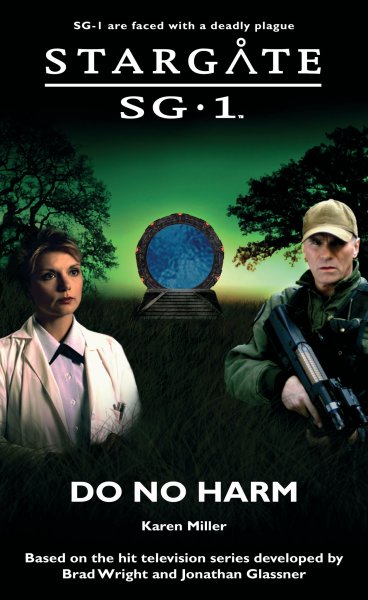 STARGATE SG1: Do No Harm

Stargate Command is in crisis — too many teams wounded, too many dead. Tensions are running high and, with the pressure to deliver tangible results never greater, General Hammond is forced to call in the Pentagon strike team to plug the holes.

But help has its price. When the team’s leader, Colonel Dave Dixon, arrives at Stargate Command he brings with him loyalties that tangle dangerously with a past Colonel Jack O’Neill would prefer to forget. Assigned as an observer on SG-1, hostility between the two men escalates as the team’s vital mission to secure lucrative mining rights descends into a nightmare.

Only Dr. Janet Fraiser can hope to save the lives of SG-1 — that is, if Dave Dixon and Jack O’Neill don’t kill each other first…

Beyond the retreat’s open door the sun was setting, the Adjoan sky streaking from blue to pink. It’d be dark soon, and if he had to argue with Dixon till his tongue fell out he wasn’t going to let some stupid medical protocol get in the way of doing what was right.

“Would you leave one of your men out there?” he continued. “No. So if you’re suggesting Lotar’s somehow a second-class citizen because she’s not from Earth then —”

“Whoah, whoah, settle down,” said Dixon, a bite in his voice. “Did I say that? What I said was that bringing another sick person in here could increase our chances, yours and mine, of catching whatever the hell it is that’s going round. Because we’re not sick yet and I’d like to keep it that way.”

“Oh for crying out loud!” he shouted. “We’re already exposed.”