STARGATE SG-1: Survival of the Fittest 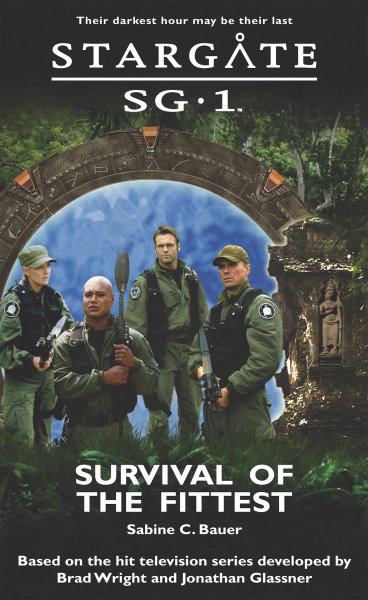 STARGATE SG-1: Survival of the Fittest

An eye for an eye…

Colonel Frank Simmons has never been a friend to SG-1. Working for the shadowy government organization, the NID, he has hatched a horrifying plan to create an army as devastatingly effective as that of any Goa’uld.

And he will stop at nothing to fulfill his ruthless ambition, even if that means forfeiting the life of the SGC’s Chief Medical Officer, Dr. Janet Fraiser. But Simmons underestimates the bond between Stargate Command’s officers. When Fraiser, Major Samantha Carter and Teal’c disappear, Colonel Jack O’Neill and Dr. Daniel Jackson are forced to put aside personal differences to follow their trail into a world of savagery and death.

In this complex story of revenge, sacrifice and betrayal, SG-1 must endure their greatest ordeal…

Survival of the Fittest

Daniel shuffled over to Jack who seemed to be coming round, his face bone-white under a mudpack.

“Love what they’ve done with the gate room.” Jack blinked up at the canopy. “Where the hell are we? Mato Grosso?”

“Doesn’t look like Brazil to me.” Daniel sniffed, squinting at the blur of a monumental structure behind them. High in the wall, the gate formed the third eye in a stone-carved mask that placidly gazed down at him. “My money’s on Angkor Wat.”

“You know. The Khmer temples in Cambodia.”

“Didn’t know they kept a Stargate there.”

“Uh, they don’t, I guess. If they did, somebody’d have found it by now.” Glancing at fuzzy walls and reliefs again, Daniel said, “This is amazing. We definitely need to check out this place. It could—”

“We don’t know where we are, we’re hogtied, we’ve got no weapons or supplies, and we— Holy buckets!” Jack had finally turned his head to get a spectacular view of Daniel’s face. “You know, you’re… Nah, I won’t say it.”

“I’m not gonna say you’re a sight for sore eyes.”