STARGATE SG-1: The Cost of Honor 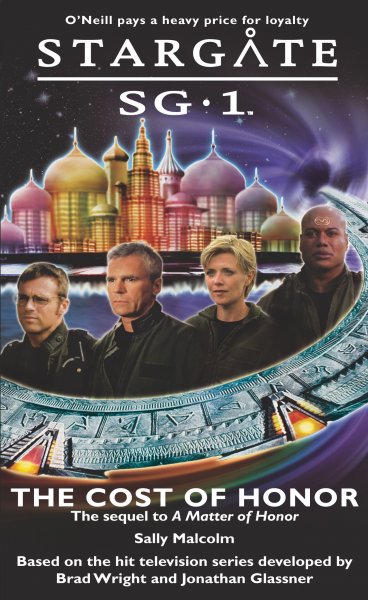 STARGATE SG-1: The Cost of Honor

In the action-packed sequel to A Matter of Honor, SG-1 embark on a desperate mission to save SG-10 from the edge of a black hole. But the price of heroism may be more than they can pay...

Returning to Stargate Command, Colonel Jack O’Neill and his team find more has changed in their absence than they had expected. Nonetheless, O’Neill is determined to face the consequences of their unauthorized activities, only to discover the penalty is far worse than anything he could have imagined.

With the fate of Colonel O’Neill and Major Samantha Carter unknown, and the very survival of the SGC threatened, Dr. Daniel Jackson and Teal’c mount a rescue mission to free their team-mates and reclaim the SGC.

Yet returning to the Kinahhi homeworld, they learn a startling truth about its ancient foe. And uncover a horrifying secret...

The Cost of Honor

“Damn it!” Watts yelled from the DHD. “This is pointless, sir! It won’t stay open!”

Standing up slowly, Major Henry Boyd glanced up at the twisting nightmare in the sky. It looked like some hideous creature come to tear them to pieces. “Keep trying,” he told the Captain.

“Sir?” Lieutenant Jessica McLeod ripped her gaze from the sky, voice shaking. “I’ve been thinking about why the gate won’t activate.

The gravitational force of the—” She stammered over the word. “Of the black hole would create a massive time distortion effect.”

He stalked toward her, frowning. “A what?”

“Time here will be moving much slower than back on Earth, sir. Much slower. The gate was probably open for half an hour at the SGC, but here…just a second.”

Boyd felt his heart clench tight. “What are you saying, Lieutenant?”

She looked bleak. “I don’t think we’re getting out of this one, sir.”

Lucy. His daughter was the first thought in his head. Sweet, innocent, adoring Lucy. Her little arms around his neck, her delighted smile when he came home. Daddy! He swallowed hard. “I won’t accept that, Lieutenant.” Lucy, barely old enough to understand. Heather, having to explain why he was never coming home again. “They’ll find a way to come get us. They won’t leave us here.”